Have you been spending too much time on Facebook recently? (Please say yes, if only to make me feel a tiny bit better about my own Screen Time reports.) If you’re not sure what counts as “too much”: when you find yourself rolling your eyes at every third post, and your eyes themselves are vibrating in their sockets, you’ve spent too much time on Facebook. (Not speaking from any personal experience, of course.) For all its drawbacks, though, Facebook can be a good space for productive conversation starters.

Late yesterday afternoon, my dad looked up from Facebook with an almost mischievous twinkle in his eye. “Follow my logic on this,” he started. (“This is gonna be good, whatever it is,” Mom said to me as Dad continued.)

I had to take a minute; I’d never thought about it that way, but the logic seemed glaringly obvious once he pointed it out. Of course, his point was not to start an argument about immigration, but to highlight the logical inconsistency of a fairly widely held belief in our culture. Why is this Christian nationalism (which is a difficult term to define objectively, but goes beyond the affectionate patriotism I focused on in my last post) such a deeply-ingrained idea for many American Christ-followers? Because we’ve fallen under a spell that has blinded us to logical argument.

This phenomenon of enchantment goes far beyond nationalism. Differences in fundamental beliefs can make conversations seemingly impossible; we want to convince others to “see reason” without realizing that we ourselves forfeited reason by operating from our own enchantment. We easily lose sight of the truth. In The Silver Chair, C.S. Lewis uses a children’s story to illustrate this experience. The villain of the story, known to the characters as “the Lady of the Green Kirtle” and to readers as the Witch who has plagued Narnia throughout the series, makes every effort to keep the prince and his rescuers under her spell.

“When she had come to a little ark set in the wall not far from the fireplace, she opened it, and took out first a handful of a green powder. This she threw on the fire. It did not blaze much, but a very sweet and drowsy smell came from it. And all through the conversation which followed, that smell grew stronger, and filled the room, and made it harder to think. Secondly, she took out a musical instrument rather like a mandolin. She began to play it with her fingers – a steady, monotonous thrumming that you didn’t notice after a few minutes. But the less you noticed it, the more it got into your brain and your blood. This also made it hard to think.”

Of all the tools at her disposal, the Witch’s craftiness in conversation is perhaps the most effective. With her prey’s minds dulled and their senses muted, she soothes them into compliance with half-truths about Narnia, their true home. Her lilting voice begins to equate their rich, above-ground life in Narnia with the dank, dark Underland in which the heroes are now (unwittingly) trapped. The Witch even manages to convince the children that Aslan, the Creator of Narnia, is nothing but a dream. Just as the last inkling of hope seemed to fade, Puddleglum, a native Narnian, “desperately gathering all his strength, walked over to the fire. Then he did a very brave thing… With his bare foot he stamped on the fire, grinding a large part of it into ashes on the flat hearth.” The enchantment breaks, and the Witch’s soothing voice transforms immediately into a serpent’s raging one. 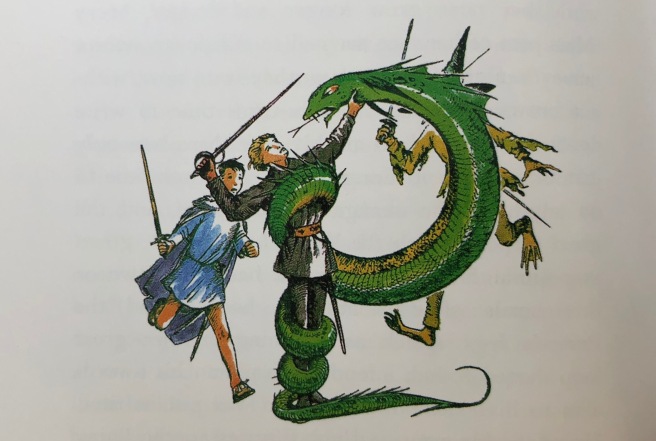 As much as we might like to think we aren’t vulnerable to the spells of fairy tales, another book reminds us that we are. Throughout Scripture, we see the people of God falling almost constantly under the influence of idolatry and pride. Prophets like Jeremiah and Isaiah speak the word of the Lord to a people experiencing judgment for their rebellion. The people of God had become comfortable under an enchantment, and they needed to be woken up.

I shared this Tweet yesterday, and it sparked some good conversations online. I appreciate Karen Swallow Prior’s insight and perspective here, which differs markedly from the general panicky conservative response to church gathering regulations under COVID-19. I also think that, in order to understand this post addressing the Church, it’s important to define “judgment” well. This is not a final act of destructive punishment – the ultimate handing-over to the logical end of our pride – although that will come one day for those who find themselves apart from the Lord. Until that day, this judgment has redemption in mind.

Researching judgment, I found that the word in the Old Testament also includes connotations of justice, righteousness, and instruction. Judgment is a legal term, in a way. It’s the natural response of a God who will not contradict His own justice, even as He is merciful towards His children. Did you hear that? This judgment is merciful. It is the way of breaking the enchantment we’ve chosen.

To a people blinded by their own pride, Isaiah said:

“The way of peace they do not know; there is no justice in their paths. They have turned them into crooked roads; no one who walks along them will know peace. So justice is far from us, and righteousness does not reach us. … The Lord looked and was displeased that there was no justice. He saw that there was no one, he was appalled that there was no one to intervene; so his own arm achieved salvation for him, and his own righteousness sustained him. … ‘The Redeemer will come to Zion, to those in Jacob who repent of their sins,’ declares the Lord.” – Isaiah 59:8-9, 15-16, 20

Jeremiah speaks similarly to any Israelites who will listen.

“‘Why do you bring charges against me? You have all rebelled against me,’ declares the Lord. ‘In vain I punished your people; they did not respond to correction,’” (Jer. 2:29-30).

“‘If you, Israel, will return, then return to me,’ declares the Lord. ‘If you put your detestable idols out of my sight and no longer go astray, and if in a truthful, just and righteous way you swear ‘As surely as the Lord lives,’ then the nations will invoke blessings by him and in him they will boast,’” (Jer. 4:1-2).

Exile and judgment were meant to put the people’s feet to the fire. God gave them exactly what they wanted in the hope that they would realize the emptiness of rebellion and wake up. Judgment was their opportunity to turn to Yahweh again, to abandon their idols when they realized their futility.

Our deeply ingrained beliefs will not be recognized and subverted overnight. (I guess Saul on the road to Damascus might be a note-worthy exception, but even he had to spend a few days after his encounter with Jesus before he became the Paul we know and love.) As Lewis wrote, “It is not easy to throw off in half an hour an enchantment that has made one a slave for ten years.” Thankfully, we don’t need to rely on our own power for this – in fact, we can’t. In Silver Chair, Jill calls on the name of Aslan; in our world, we trust the name of Jesus and the power of His Spirit to transform our minds.

As Jeremiah and Isaiah have pointed out, our reliance on Jesus doesn’t mean we don’t take some initiative. We are still called to repent and invited to return to our Lord. In order to receive the redemptive aspect of judgment, we must still choose to accept what God has offered. That’s as true in the Old Testament as it is in the New Testament as it is today. When we take that first step away from our rebellion, we realize our Father is ready and waiting, eager to carry us back to Himself so we don’t have to walk too far on our burned feet. His judgment is merciful.

Could we choose to let this be virus a redemptive judgment for the Church, waking us up from our distracted worship? Can the tumult of our nation become a reminder jarring us out of idolatry? Might the people of God – the global body of believers, no longer merely the nation of Israel – screw up the courage to stick our feet into the fire? It’s slow work, overturning enchantment, but very possible. It requires a lot of prayer and a lot of Scripture, followed by a lot of grace-filled conversations and a lot of time and energy spent addressing whatever is uncovered in us as we throw off our particular enchantments.

For further reading, I highly recommend The Color of Compromise: The Truth About the American Church’s Complicity in Racism by Jemar Tisby and posts from Ed Stetzer on patriotism such as this one (or its longer companion piece here).

View all posts by Nathan Storms

2 thoughts on “Feet to the Fire”

Need help on a writing project? I offer proofreading and editing through Fiver for articles, blogs, essays, and more!

Sneak peek at my Tweets:

Catch up on recent posts:

A closer walk with our beloved friend.

-Reviews, Advice & News For All Things Tech and Gadget Related-

For the thoughts I can't contain- Would you think with me?

Your Last Day On Earth
Being Aware

A inward journey in this outside world.

Views From Around the Corner

Looking at life from a safe distance

The Blog of Author Steven Colborne

The official bulletin of the artist IMPREINT created to repost excerpts from 'En plein air'.

"I have enough time to rest, but I don't have a minute to waste". Come and catch me with your wise words and we will have some fun with our words of wisdom.